Throughout the 1500’s, civilians start wearing swords resulting in increased duels. Lacking military shields or armor, duelists use bucklers and daggers (poignards) to parry attacks. From circa 1525 to circa 1625, the rapier is accompanied by a poignard, sometimes made and as a matched set.

Cut and thrust rapier with swept-hilt

1511 Henry VIII  establishes the Royal Almain Armoury in Greenwich, near London; German swordsmiths from Solingen and Passau are employed in the Armoury due to a lack of skilled English craftsmen.

1525-1550 Spanish nobles start wearing the espada ropera (sword of the robe), or rapier, for protection and status. These were long bladed cut and thrust weapons.

1540 Henry VIII grants a charter to the Company of Masters of Defense of London to solely teach gentlemen the arts of weaponry.

1599 George Silver publishes  The Paradoxes of Defence criticizing the lack of defense inherent in the rapier systems.

Late Century: the  Solingen Sword Makers Guild dominates the industry with trade secrets for producing the finest blades in Europe, earning the German city the moniker, “City of Blades.”

1604 (after) George Silver publishes his Bref Instructions on my Paradoxes of Defence  (n.d.).  Silver advocates use of more versatile and relatively shorter backsword, and advocates attacking with a gathering step followed immediately by “flying out” again, in addition to using both the thrust and cut. Silver’s latter publication will not be discovered in the modern age until 1898 when Captain Cyril G. R. Matthey found a copy in the British Museum.

ca. 1620 -1640 Cavalier hilt becomes popular among English & Dutch where the thrust is favored.

ca. 1640 – 1650 The Cavalier hilt is modified and evolves to incorporate two dished shells into the guard, recognizable as the clam-shell guard, or “coquille” meaning shell in French.

1650 The transitional rapier emerges, providing a bridge between the rapier and smallsword. A shorter, lighter blade confers advantage with faster blade work. These personal sidearms spread throughout Europe among the upper class demonstrating social rank and personal wealth.

1660 Charles II returns to England after exile on the Mainland, including time in France. Upon his return, he brings with him the smallsword.

1670 Philibert de La Touche publishes Les Vrayes Principles de l’Espe’e Seule published in Paris. He is the first to illustrate the use of the foiled practice weapon, and the last to include use of the  estramaçon, a drawing cut with the edge, derived from rapier practice.

1680-1720 Hollow-ground colichemarde blades featuring triangular cross-section and a wide forte, develop and spread, possible originating in France by Count Königsmark, though some evidence contradicts this. Colichemarde Blades are light, stiff, are very fast, lack sharp edges, with lengths ranging from 29″- 33″ (75-85 cm). The focus on point and diminished emphasis of edge leads to extinction of the cut in smallsword.

1688   England grants a patent for hollow-ground blades but production is stifled due to political unrest. 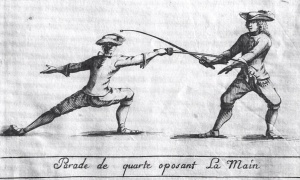 1690 Labat (L’Abbat) advocates use of foils (fleurets) for practice and established rules for competition.

1691 Protestant German craftsmen from the Solingen Swordmakers guild take their trade-secrets to Shotley Bridge, England at the urging of Charles II. They create the Hollow Sword Blade Company and use a running horse hallmark consistent with the running wolf hallmark of Solingen/Passau. They apparently lack knowledge of rolling hollows, and create few hollow blades of a quality inferior to their Solingen competitors using the prior laborious methods. 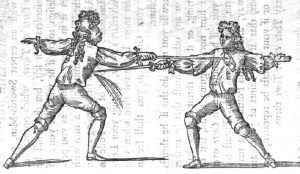 1702 Henry Blackwell advises a blade length of no more than 36″ in his text, The English fencing-master.

1707 Great Britain is established unifying the kingdoms England and Scotland via the Treaty of the Union, with rule under Queen Anne.

1707 Hope Publishes  A new, short, and easy method of fencing: Or, the art of the broad and small-sword rectified and compendized.
( see also the Linacre School of Defense.)

ca. 1710 the rapier is largely replaced by the smallsword in much of England, though its use persists through the century, especially in Spain.

1730 John Bowles publishes The Art of Fencing Represented in Proper Figures, Exhibiting the Several Passes, Encloses, Disarms, and c. Sold by John Bowles at the Black Horse in Cornhill.

1760’s to 1830’s The Industrial Revolution originates in England and quickly diffuses throughout much of Europe and to North America.

1763-75 James Watt significantly improves the efficiency of the steam engine.

1760’s The wearing of a smallsword begins to fall out of fashion in England;

1765 Domenico Angelo publishes a bilingual edition of L’Ecole des Armes in both French and English.

1771  Olivier publishes Fencing familiarized: Or, A new treatise on the art of sword play in London.

1775 King Louis XVI ascends the throne of France; he soon attempts to incorporate Enlightenment reforms which are blocked by the French nobility.

1776 American Colonies declare independence from England and mount a revolution.

1783 The United States achieved independence via the Treaty of Paris.

1787 Henry Angelo edits and reprints his father’s work in London as the The school of fencing: With a general explanation of the principal attitudes and positions peculiar to the art.

1792 The First French Republic is established.

1799 Napoleon Bonaparte overthrows the French Directory by a coup d’état.

Late Century: wearing of smallsword falls completely out of fashion throughout Europe but persists in formal and ceremonial settings as the court sword.

1860’s Fencing established as a sport

2009 the Martinez Academy publishes L’École Française, a DVD illustrating the French approach to the smallsword.

1 Response to Explore the Timeline